Home - How to Test Surge Protector the Quick and Easy Way?

How to Test Surge Protector the Quick and Easy Way?

Another thing you have to be aware of is that all surge protection devices come with a limited life span. And typically after suffering from a couple of hits (from power spikes and surges), your surge protector will be no more than just a power strip where power is allowed to pass through to your plugged-in devices without protection. 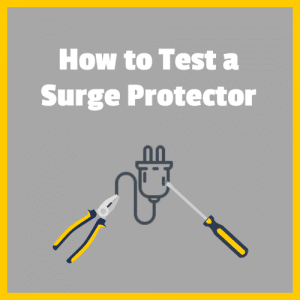 One thing for sure, if you are using a surge protection unit purchased more than a few years ago, it is probably in your best interest to replace it.

Sometimes, after resetting the surge protector, a beeping sound may get triggered and this is when more thorough testing is required. Usually, a service manual should provide instructions on how to conduct more comprehensive testing.

When seeking a replacement, be sure to get one that comes with multiple LED indication lights (as mentioned earlier) that would notify you when it is no longer able to protect your prized electrical devices. This is probably the best form of “test” to confirm if your surge protection device is still protecting your connected electronics or not.

Most high-end surge suppressors these days come with very clear-cut, user-friendly LED indicators which are fairly hard to miss when an issue arises. Some brands and models even come equipped with audible alarms or beeping sounds to notify you when it has exhausted its surge protection joules.

One thing to note is that the lifespans of surge suppressors cannot be measured in years. There is usually a specific amount of joules that is designed and built into each model of the surge protection device. Once the surge protection joules are used up, it should warn you (*check LED indicator) that it is no longer capable of protecting your plugged-in devices. Hence it is definitely the right time to replace it with a new unit.

*LED indicators are not foolproof

When shopping for surge protectors, be sure to look out for certification and compliant stamps like IEC 61643-1 / ANSI/IEEE C62.xx / UL 1449 etc. Since there is no easy way to physically or scientifically test out a surge protector, the best bet is usually to get it from reputable manufacturers like Tripp lite, APC, Belkin, and so on.

Why is My Surge Protector Beeping Out of the Blue?

How Long is Surge Protector Lifespan? The Answer May Shock You!

GagtheSurge editorial team handles most part of the review post editing and information article writing for the website. Write to us if you are interested in joining our team.

Added to wishlistRemoved from wishlist 0

4 Risks of NOT having Garage Door Opener Surge Protector

Added to wishlistRemoved from wishlist 0

Washing Machine Surge Protector – Do You Really Need One at Home in 2022?

Added to wishlistRemoved from wishlist 2

Is It Really Dangerous to Daisy Chain Surge Protectors and Extension Cords?

Amazon Affiliate Disclosure Notice: It is important to also note that GagTheSurge is a participant in the Amazon Services LLC Associates Program, an affiliate advertising program designed to provide a means for website owners to earn advertising fees by advertising and linking to amazon.com, endless.com, smallparts.com, myhabit.com, and any other website that may be affiliated with Amazon

*Amazon and the Amazon logo are trademarks of Amazon.com, Inc, or its affiliates

This website uses cookies to improve your experience while you navigate through the website. Out of these cookies, the cookies that are categorized as necessary are stored on your browser as they are essential for the working of basic functionalities of the website. We also use third-party cookies that help us analyze and understand how you use this website. These cookies will be stored in your browser only with your consent. You also have the option to opt-out of these cookies. But opting out of some of these cookies may have an effect on your browsing experience.
Necessary Always Enabled
Necessary cookies are absolutely essential for the website to function properly. This category only includes cookies that ensures basic functionalities and security features of the website. These cookies do not store any personal information.
Non-necessary
Any cookies that may not be particularly necessary for the website to function and is used specifically to collect user personal data via analytics, ads, other embedded contents are termed as non-necessary cookies. It is mandatory to procure user consent prior to running these cookies on your website.
SAVE & ACCEPT